I think my favorite “untranslatable” word is the word Saudade, from Portugese.  This word is so unique, so important to Lusophone culture, and describes such a specific and complex emotion, that it has its own 3,500+ word wikipedia article.

One of the briefer definitions of this word says that it is “…vague and constant desire for something that does not and probably cannot exist … a turning towards the past or towards the future.”  It is related to the English word nostalgia, but it is stronger and perhaps sadder than that, and also to the English verb to pine, but notice how we don’t have a noun to describe the emotion we feel when we are pining.  It is yearning and longing, and missing, but it’s not necessarily all sadness: another description says that it is “the recollection of feelings, experiences, places or events that once brought excitement, pleasure, well-being, which now triggers the senses and makes one live again.”  It’s a bittersweet emotion, perhaps a bit fatalistic, perhaps a bit melancholic, perhaps a bit hopeful.

Of course, I’m just an English speaker trying to grasp a word that I’m not actually familiar with.  This word, and the emotion underlying it, are regarded as somehow particularly Portugese, and Brazil even recognizes Saudade Day as an official national holiday.  I wonder, have I ever felt saudade?  What would I have called it at the time?

I think perhaps music can hit upon this emotion a little better than my poor writing skills.  What could be more perfect for songs than an emotion that combines nostalgia, love, loss, hope, and despair?  Here is the great Cesária Évora performing one of her most famous songs at the age of 63 (Sodade is the Cape Verdean Creole version of the word)

When you think of musicians who tap into the more melancholic emotions, does Nick Cave immediately come to mind?  He actually spent several years living in São Paulo, and he once said that the only way he could describe the emotion behind his album The Good Son was to call it saudade.

“The Ship Song” is one of the most romantic, beautiful, haunting songs I’ve ever heard, and it makes me very happy to hear it, and also somehow makes me want to weep.  It’s not the words, necessarily.  Do you know what I mean?  Perhaps listening to Nick Cave is as close as this English speaker will ever get to true saudade.

On Monday night I had the pleasure of getting to see a screening of a movie called The Island President, which was followed by a Q&A with (former) President Mohamed Nasheed himself.

As the movie follows President Nasheed around the islands of the Maldives, he discusses politics, democracy, and the effects of climate change with his constituents, conversing in a native tongue peppered with English and sometimes Arabic words.

Do you know what language they speak in the Maldives?  Neither did I!  The people of the Maldives speak a language called Dhivehi (or just “Maldivian”), which is an Indo-Aryan language closely related to the Sinhala language of Sri Lanka.  Dhivehi is written in its own alphabet, called Thaana.

In the documentary, President Nasheed joins with a group of presidents of other small island nations who are similarly concerned about the future of their countries in the face of rising sea levels.  The UN recognizes these as a distinct group known as the Small Island Developing States.  I know so very little about these countries (where the heck are the Comoros?) and it’s a real shame.  So in honor of the film, today’s pop quiz is about the languages of the small island nations!

To help you out a bit, here is a map of “small states” compiled by wikipedia, which you can click to enlarge in a new window.  (Oh there’s the Comoros!)

2. English and Gilbertese are the official languages of which island nation?
a) Samoa   b) Seychelles  c) Kiribati  d) Bahamas

3. Creoles are spoken on which of these islands?
a) Jamaica  b) Trinidad and Tobago  c) Seychelles  d) all of the above

4. The Cook Islands are a group of relatively autonomous islands in the far South Pacific.  The residents of the Cook Islands speak English along with a unique dialect of:
a) French   b) Maori   c) Kriol   d) Hawaiian

5. Portugese is the official language of which of these island nations?
a) Cape Verde   b) Saint Lucia   c) Samoa   d) Tuvalu

7. Which island language is actually a “set of Swahili dialects” according to wikipedia?
a) Comorian  b) Seychellois Creole  c) Palauan  d) Tuvaluan 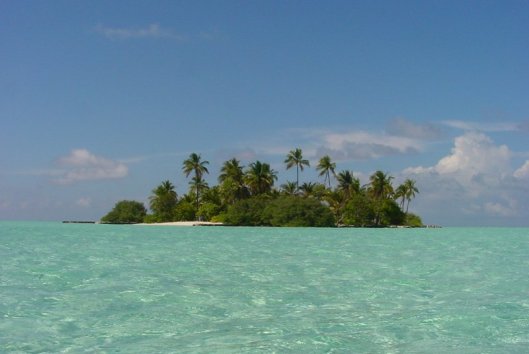 One of the 1,192 islands of the Maldives

Answers: 1. a) all of the above!;  2. c) Kiribati (the name comes from the local rendering of the English term “Gilbert Islands”);  3. d) all of the above!;  4. b) Maori; 5. a) Cape Verde; 6. d) Palauan; 7. a) Comorian; 8. b) Papua New Guinea – with an eye-popping 830 living languages at last count.
Extra credit: False.  The “pisin” in the term probably did come from the word “pidgin”, as the language almost certainly started as a pidgin among the speakers of the hundreds of Papuan languages, but it has since developed into a fully-fledged creole language.

This was a tough one!  I hope you learned something new – I sure did while researching for this quiz.

The Maldives, along with all of the islands featured in this quiz, belong to an organization called the Alliance of Small Island States.  Please check out their website to learn more about the issues these nations face and the important work they are doing together.

The other day a friend of mine said that he thought that “creole” was “what they spoke in Louisiana,” and I think that most people in the US probably associate that term with anything and everything Cajun.  But there are actually quite a few creoles all over the world.  You’ve probably heard the words “pidgin” and “patois” when discussing languages, but sometimes all three of those terms get a bit mixed up, so I thought it would be interesting to explore them here.

Pidgin refers to a system of communication between speakers of two or more languages who come into extended contact with one another.  These are simplified languages; they’re sort of a makeshift way of people getting by together.  Often these can develop in places where there is trading going on over an extended period of time, or for example during the colonial era when slaves or indentured servants from many different communities were brought into contact with each other.  In these contexts people do the best they can to get their point across, but don’t develop the more sophisticated components of language (i.e. grammar, syntax), so we say that a pidgin isn’t a fully-fledged language.  (If you’ve ever traveled to a place where you didn’t speak the language and they didn’t speak yours, and you managed to make do with some gestures and very basic words, you know what the beginnings of a pidgin might be like.)

A creole is a fully-fledged language.  Unlike pidgins, creoles are learned as first languages by children, and are every bit as complex and developed as any other human language.  People who study creoles sometimes refer to “substrates” and “superstrates” – superstrates are the languages that supply most of the material, especially vocabulary, to a creole, while substrates are the other languages that are blended in.  For example, Haitian Creole has French as its superstrate and several African languages as its substrates.  If you speak French, you might pick up many words in this language, but the two languages are distinct in many important ways.  (Louisiana Creole is also French-based.)

The term patois is harder to define, and isn’t so much a technical term for any particular category as it is sort of a catch-all adjective to describe nonstandard languages or dialects.  In some instances it can come across as kind of an insult; if you don’t speak the prestige dialect of your country or region, or if you speak a sort of “broken English”, someone might say you speak a patois.  But, again, the term isn’t strictly defined, and Jamaicans sometimes refer to their own language as Jamaican patois…when it’s actually a creole.

Many scholars think that creoles are languages that develop naturally among children raised by pidgin-speaking adults.  Pidgins suffice for these adults in their adult lives, and work okay for second language contexts, but first-language learners have a natural tendency towards structure and comprehensiveness, so it is believed that these children take the raw material from the simplified language and create a full, natural language.

If you’re interested in learning more, Derek Bickerton is probably the preeminent Creolist working these days.  He has a lot of scholarly work out there of course, but for an easy (and wildly entertaining) intro I’d like to recommend a book called Bastard Tongues, which is a memoir/scholarly analysis/travelogue of his fieldwork among the creoles of the world.

© Allison Taylor-Adams and Polyglossic, 2012-2014. Unauthorized use and/or duplication of this material without express and written permission from this blog’s author and/or owner is strictly prohibited. Excerpts and links may be used, provided that full and clear credit is given to Allison Taylor-Adams and Polyglossic with appropriate and specific direction to the original content.
%d bloggers like this: